It’s 8:15 am, and I’m at the Bay Bridge toll plaza. The traffic is horrendous, as it always is. I notice a woman in a car next to me. She is flipping off the world, her middle finger pressed against the closed driver’s side window. She glances at me, her hand doesn’t move.

She rolls down her window. I roll down mine.

“Everyone waits until the last minute to get into the FasTrak lane! These people are so rude!”

“Dream of the possibility of a world where everyone is as nice as we are.”

She cracked a smile, rolled up her window, and mouthed the words to me.

Her left hand now rested on her lap. 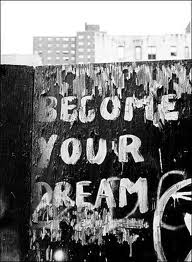 Dream is one of my favorite words, because when you dream, nothing is impossible.

I have signed a deal with CBS Interactive to host a year-long podcast/blog/video series, “The Entrepreneur Next Door”. The series will feature interviews with 52 dreamers, women and men who have taken the leap of faith and started their own businesses –  and  succeeded.

Little tidbits will air on the #1 radio station in San Francisco, KCBS. The words and images will live on the CBS digital platforms, and all of the social sites.

I cannot imagine a more perfect gig for me.

I spent years asking, begging, pleading, cajoling, and sometimes demanding that someone, anyone… listen to my dreams. I received the cruelest kind of rejections – the unanswered email, the condecending tone, the meeting that never materialized.

I’m going to make 52 new friends who believe in the power of a dream. I’ll learn new ideas and concepts, I’ll discover new ways of thinking, and I’ll share the stories with you.

The series launches in January.

I was wondering if you could hurry up and get here a bit faster. I have some dreams to hear, and a few to pursue. Anyone who tries to slow me down will be steamrolled.

I’m not in the mood to fail.